Dan Crosta
This article is cross-posted on my personal blog, late.am.

For our hackathon this week, I, along with several co-workers, decided to re-implement Vowpal Wabbit (aka “VW”) in Go as a chance to learn more about how logistic regression, a common machine learning approach, works, and to gain some practical programming experience with Go.

Though our hackathon project focused on learning Go, in this post I want to spotlight logistic regression, which is far simpler in practice than I had previously thought. I’ll use a very simple (perhaps simplistic?) implementation in pure Python to explain how to train and use a logistic regression model.

Logistic regression, like many machine learning systems, learns from a “training set” of previous events, and tries to build predictions for new events it hasn’t seen before. For instance, we train our click prediction model using several weeks of ad views (impressions) and ad clicks, and then use that to make predictions about new events to determine how likely the user is to click on an impression.

Each data point in the training set is further broken down into “features,” attributes of the event that we want the model to learn from. For online advertising, common features include the size of the ad, the site on which the ad is being shown, the location of the user viewing the ad, and so on. 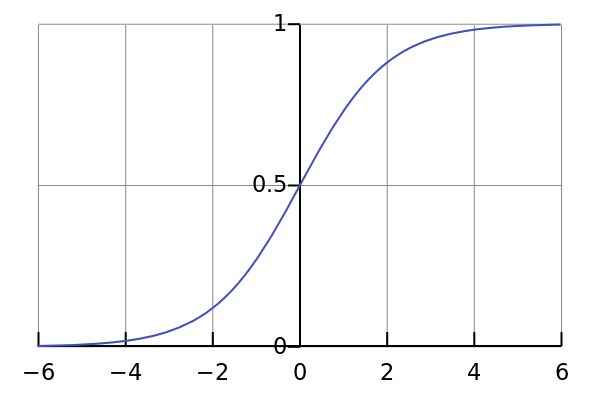 Let’s consider a click data set. Each row in the table is an event we’ve (hypothetically) recorded, either an impression which did not get a click, or an impression plus click, along with a series of attributes about the event that we’ll use to build our regression model.

These 30 data points will form our training data set. The model will learn from these examples what impact the attributes — size, site, browser, and US state — have on the likelihood of the user clicking on an ad that we show them.

In reality, to build a good predictive model you need many more events than the 30 that I am showing here — we use tens of millions in our production modeling pipelines in order to get good performance and coverage of the variety of values that we see in practice.

To convert this data set to work with logistic regression, which computes a binary outcome, we’ll treat each click as a target value of 1.0, also known as a “positive” event, and each impression as 0.0, or a “negative” event.

We also need to account for the fact that each of our features is a string, but logistic regression needs features that have values that it can multiply by its weight to compute the sum-of-products. Our features don’t have numeric values, just some set of possibilities that each attribute can take on. For instance, the size attribute is one of three ad sizes we work with, 300x250, 728x90, or 160x600. Features that can take on some set of discrete values are called “categorical” features.

We could assign a numeric value to each of the possibilities, for instance use the value 1 when the size is 300x250, 2 when the size is 728x90, and 3 when the size is 160x600. This would work mechanically, but won’t produce the outcome that we want. Since the weight of the feature “size” is multiplied by the value of the feature in each event, this would mean that we’ve decided, arbitrarily, that 160x600 is three times more “clicky” than 300x250, which the data set may not bear out. Moreover, for some attributes, like site, we have many many possible values, and determining what numeric value to assign to each of the possiblities is tedious, and will further amplify the problem as described here.

The proper solution to this problem is as effective as it is elegant: rather than having 1 feature, “site” with values like “ebay.com” or “msn.com”, we create a much larger set of features, one for each site that we have seen in our training or evaluation data set. For a given training data example, if the “site” column has value “msn.com”, we say that the feature “site:msn.com” has value 1, and that all other features in the “site:…” family have value 0. Essentially, we pivot the data by all the values of each categorical feature. Of course, the total number of features in our training set becomes very large, but, as we will see, SGD can accomodate this gracefully.

At the start of the hackathon, we wrote some very simple Python code to serve as a reference for how logistic regression should work. Python reads almost like pseudocode, so thats what we’ll show here, too.

We decided to model examples as Python dictionaries, with a top-level field indicating the actual outcome (1.0 for clicks, 0.0 for impressions), and a nested dictionary of features. Here’s what one looks like:

Given an example and a dictionary of weights, we can predict the outcome straighforwardly:

We initialize the score to 0, then for each feature in the example, we get the weight from the dictionary. If the weight doesn’t exist (because the model hasn’t been trained on any examples containing this feature), then we assume 0 as the weight, which leaves the score as-is.

Additionally, we add in a “bias” weight, which you can think of as a feature that every example has. The “bias” weight helps SGD correct for an overall skew in our training data set one way or another. It’s possible to leave this out, but it’s generally helpful to keep it.

The expression at the end of this function is the logistic function, as we saw above, which squashes the result into the range 0 to 1. We do this because we are trying to predict a binary outcome, so we want our prediction to be strictly between these two boundary values. If you do the math, you’ll see that for an empty model — one with nothing in the weights dictionary — we will predict 0.5 for any input example.

Generating the features we use in SGD from our example is similarly straightforward:

Since our features are categorical, we can take advantage of Python’s dictionary to generate (key, value) pairs as the actual features. Though all our examples have values for each of the four attributes we’re considering, they each have different values — thus the tuples generated by extract_features will be different for each example. This is our conversion from attributes with a set of possible values, to features which carry the implicit value 1.

Finally, we have enough code in place to see how stochastic gradient descent training actually works:

For each example in the training set, we first compute the prediction, and, along with the actual outcome, we compute the gradient. The gradient is a number between -1 and 1, and helps us adjust the weight for each feature, as we’ll see in a moment.

For the first example, or more generally, the first time a given feature is seen, the feature weight is 0. But, since each example has a different set of features, over time the weights will diverge from one another, and converge on values that tend to minimize the difference between the actual and predicted value for each example.

What I’ve shown here is a very basic implementation of logistic regression and stochastic gradient descent. It is enough to begin making some predictions from your data set, but probably not enough to use in a production system as is. But I’ve taken up enough of your time with a relatively long post, so the following features, then, are left as an excerise to the reader to implement: